From
THE GOOD DRUG GUIDE

"...Amineptine (Survector) is a clean-ish, (relatively) selective dopamine reuptake blocker. Higher doses promote dopamine release too. In humans, the half-life of amineptine is less than an hour; the half-life of its major metabolite, the 5-amino-heptanoic acid derivative, is around 2.5 hours. Extracellular noradrenaline levels in the frontal cortex and dorsal hippocampus are anomalously elevated: amineptine's noradrenaline reuptake inhibiting properties in vitro are weak.

Amineptine is pro-sexual and liable occasionally to cause spontaneous orgasms. It is a mild but pleasant psychostimulant and a fast-acting mood-brightener.

The compound was first synthesized by French pharmaceutical giant Servier. Licensed in France from 1978 under the brand name "Survector" and soon widely marketed abroad, amineptine is a clinically useful antidepressant. Unlike most other tricyclics, it doesn't impair libido or cognitive function.

Amineptine has a small but non-negligible abuse-potential. Its enjoyable but short-lived psychostimulant effect should be distinguished in clinical practice from its sustained antidepressant action. Arguably all too many contemporary "antidepressants" lack abuse-potential not through superior design or clinical efficacy, but because they aren't any good. The widely prescribed selective serotonin reuptake inhibitors (SSRIs), for instance, don't reverse the diminished libido and lack of interest in sex characteristic of (many kinds of) depression. Instead, SSRIs exacerbate the problem.

Unlike typical stimulants and other activating agents, amineptine may actually improve sleep architecture. Amineptine can be an especially valuable agent for melancholic, anhedonic and unmotivated people whose mood is sometimes worsened by SSRIs. Amineptine is also a useful agent in treating chronic "low grade" depression or dysthymia. There is little evidence of its value in anxious or agitated depression. Higher dosages may cause insomnia; if sleeplessness is a problem, amineptine is best taken in the morning. Anxious depressives may do better on its chemical cousin, tianeptine (Stablon). Amineptine shouldn't be combined with alcohol.

Amineptine isn't marketed or licensed in Britain and America. In Europe, too, the medication has been driven onto the pharmaceutical grey market. This is because FDA pressure led to the withdrawal of amineptine's EC product-license early in 1999, causing substantial problems for patients and physicians alike. In early 2005, Servier ceased production of amineptine in Brazil. It is still available as a research chemical, but the world-wide famine persists. Amineptine is off-patent, but not cheap. Optimal dosage is variable; but typically 150mg-300mg per day. No exact substitute for amineptine is currently on offer or in prospect.

In July 2021, the US Drug Enforcement Administration proposed to make amineptine a Schedule I drug, needlessly complicating life for its dwindling minority of therapeutic users. Proscription took effect in late 2022. No case of amineptine abuse has ever been recorded in the USA..." 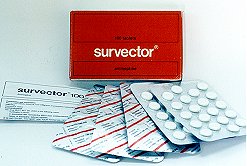